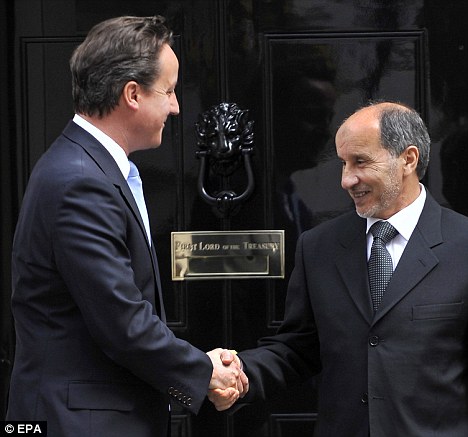 Interim Libyan leader Jalil and UK PM Cameron. There has been more pressure on Libya to get those responsible for Yvonne Fletcher's murder extradited than to get Gaddafi, if captured, to the ICC (Photo: EPA)

In a recent comment, a reader of JiC sent me a link to a Guardian post entitled: Libya may refuse to extradite Yvonne Fletcher murder suspect. Some of the statements made in the piece by Libyan rebel officials may have major implications on whether Gaddafi, if captured, might ever reach The Hague.

For those who may not know, Yvonne Fletcher was a British police officer who was shot dead during a protest in 1984 outside of the Libyan embassy in London. Numerous groups had been hoping that, with the installation of the transitional government in Libya, her alleged murderer would be extradited to the UK to finally face justice. In the wake of Fletcher’s murder, the UK severed diplomatic relations with Libya.

So why is a piece on the extradition of Yvonne Fletcher’s murderer relevant to the Gaddafi case? Because of the following statement made by the interim justice minister in Libya’s governing National Transitional Council (NTC), Mohammed al-Alagi:

“We will not give any Libyan citizen to the west.”

Another member of the NTC, Hassan al-Sagheer, similarly declared:

“Libya has never extradited or handed over its citizens to a foreign country. We shall continue with this principle.”

In 1984, Yvonne Fletcher was shot dead during a protest outside of the Libyan embassy in London (Photo: Photograph: Mohamed Maklovf / Rex Features)

Those with a keen sense for irony will point out the rather awkward situation of Libya rejecting extradition of its own nationals, while demanding that neighbouring states return pro-Gaddafi nationals.

However, the statements above don’t necessarily mean that there is no way anyone – including Yvonne Fletcher’s killer – won’t be extradited, although they are indicative of the level of resistance among the rebel governors to handing over Libyan nationals. Yet another NTC member, Fawzi al-Ali, maintains that an individual can be extradited if a “special agreement” is reached to do so. In short, what this indicates is that there will have to be significant pressure and political will in order for anyone to be extradited to face justice – including Gaddafi.

Unfortunately, for those who would like to see Gaddafi tried in The Hague (as well as those, myself included, who would like to see an ICC trial in Libya), such pressure from states is virtually absent to date. During the early stages of the conflict, key international powers, including the US and the UK, professed the need for Gaddafi to face international justice. More recently, these states have done an about-face, arguing that justice for Gaddafi’s acts is entirely up to the Libyan people (read: the NTC).

Indeed, while Yvonne Fletcher’s murderer should certainly face justice – and the UK is right to press the NTC on the matter – there is more pressure to achieve justice for her death than for the alleged war crimes and crimes committed by Gaddafi against his own people. That says a lot.

Mark Kersten is a consultant at the Wayamo Foundation, a Senior Research at the Munk School of Global Affairs, and a law student at McGill University Law School. He is also author of the book, 'Justice in Conflict - The Effects of the International Criminal Court's Interventions on Ending Wars and Building Peace' (Oxford University Press, 2016).
View all posts by Mark Kersten →
This entry was posted in International Criminal Court (ICC), Libya, Libya and the ICC, The Tripoli Three (Tripoli3), United Kingdom, War crimes. Bookmark the permalink.