The Impact of the Taylor Trial in Sierra Leone and Liberia

Annie Gell joins us with this guest-post on the impact of the Charles Taylor trial in Sierra Leone and Liberia. Annie is the Leonard H. Sandler fellow in the International Justice Program at Human Rights Watch (HRW). Immediately before joining HRW, Annie lived and worked in Port-au-Prince supporting grassroots women’s groups fighting the epidemic of gender-based violence in post-earthquake Haiti. 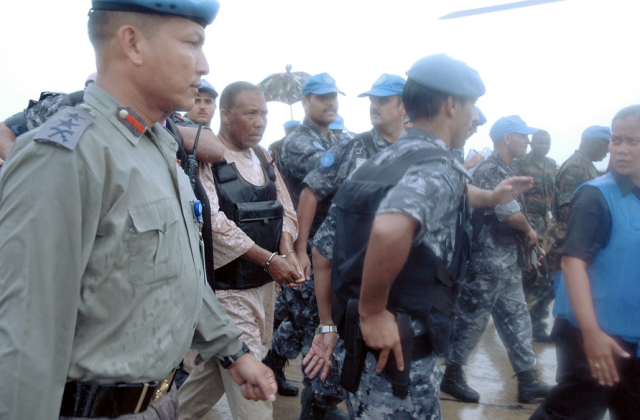 Charles Taylor shortly after being arrested in 2006 (Photo: BBC)

This week, Human Rights Watch released the report “Even a ‘Big Man’ Must Face Justice”: Lessons from the Trial of Charles Taylor.  The report is based on interviews in The Hague, London, Washington, DC, Sierra Leone, Liberia, New York, as well as a review of expert commentary, trial transcripts, and daily reports produced by trial observers. This post focuses on Human Rights Watch’s findings regarding the trial’s initial impact in affected communities and provides recommendations for achieving a fuller realization of justice in Sierra Leone and Liberia.

In May 2012, the Special Court for Sierra Leone (SCSL) sentenced Taylor, former president of Liberia, to 50 years in prison for aiding and abetting the 1991-2002 armed conflict in neighboring Sierra Leone. While it has been a long road, the successful conclusion of the trial phase was a landmark for war victims, West Africa, and efforts to ensure perpetrators of the gravest crimes are held to account. However, the trial also highlighted that major accountability gaps remain for serious crimes committed during Sierra Leone and Liberia’s brutal armed conflicts.

Findings on the Impact of the Taylor Trial

The trial’s impact must be understood within the contexts of Sierra Leone and Liberia. After the devastating armed conflicts, both countries have sought to distance themselves from their violent past. Even as neighboring Guinea and Côte d’Ivoire face significant challenges across porous borders, Sierra Leone and Liberia are attempting to build rights-respecting democracies. Yet the institutions that underpin the rule of law—including the police and judiciary—remain extremely weak and other persistent problems, such as corruption, risk undermining hard-won gains.

Consideration of the impact of the trial is constrained by at least three factors: first, the Trial Chamber only handed down its verdict in April 2012 and it could be years before the trial’s full impact is realized; second, there are inherent challenges to isolating the trial’s impact because, though significant, it is one factor of many in a complex social and political landscape; and third, analysis of the trial’s impact in this report is based on information drawn from interviews with civil society members, former combatants, members of government, journalists, and war victims in Monrovia and Freetown. No large-scale or quantitative surveys were conducted.

Despite these limitations, several noteworthy observations can be made. First, many people from affected communities are aware of the trial and have reflected on its significance. Since its inception, the Special Court has demonstrated an institutional commitment to conducting outreach within affected communities. Its outreach efforts provide a strong model for other trials, particularly those held far from the location of the crimes, as will typically be the case at the International Criminal Court. Among other activities, court staff created audio and video summaries of the trial in local languages for dissemination in Sierra Leone and Liberia, and facilitated visits to the court in The Hague by civil society members from these countries.

Second, the trial is seen by affected communities as highly significant, and as having increased local understanding of the importance of accountability. Sierra Leoneans and Liberians consistently told Human Rights Watch that Taylor’s arrest and trial helped reveal the possibility for and value of justice in West Africa.

However, the trial is only one part of a larger process. It has contributed to increased expectations for justice, but also to frustrations over the absence of greater advances to ensure wider accountability. Sierra Leoneans and Liberians said they felt dejected that direct perpetrators, former field commanders, and Taylor allies continue to live freely; some even hold governmental and other powerful posts. Domestic efforts to investigate serious crimes committed in Sierra Leone and Liberia that are beyond the Special Court’s mandate are essential for justice to be done more fully. Lack of political will on the part of the Sierra Leonean and Liberian governments to pursue these cases remains a major challenge. 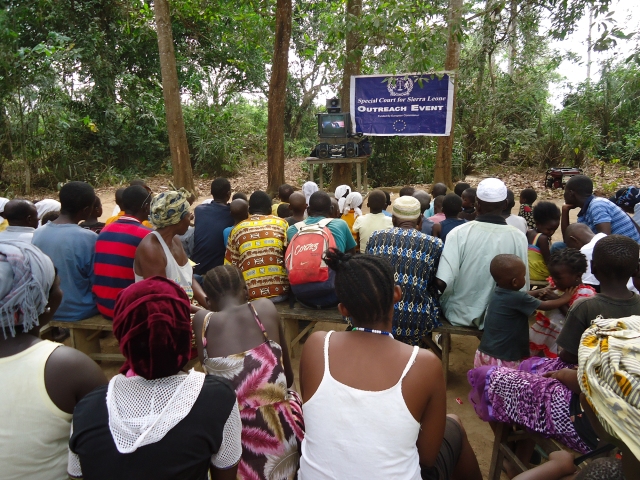 Sierra Leoneans sit in front of a television relaying images from the Special Court for Sierra Leone in The Hague on the day of the Taylor verdict, April 26, 2012. The Special Court Outreach and Public Affairs section sponsored the outdoor event, which took place at the site of mass graves near the village of Mathiri in Port Loko district. (Photo: Peter Andersen, SCSL Outreach)

Finally, Taylor’s trial, and the court more generally, appear to have contributed to promoting long-term respect for human rights and the rule of law in the sub-region. Attempting to assess the Taylor trial’s future impact on governments is a particularly complicated inquiry given the multitude of factors involved. Yet nearly all those interviewed by Human Rights Watch said the Taylor trial has had some significant positive impact on human rights in West Africa. As one official put it:

[The trial has] helped … change the historical concept that leaders are above the law and [challenge] the acceptance that leaders and elected officials can use war and violence as way[s] to carry out their personal agendas.

The trial contributed to an environment in which Sierra Leone and Liberia have held successful democratic elections and made some progress in improving basic human rights, although major problems persist in both countries.

Mark Kersten is a consultant at the Wayamo Foundation, a Senior Researcher at the Munk School of Global Affairs, and a law student at McGill University Law School. He is also author of the book, 'Justice in Conflict - The Effects of the International Criminal Court's Interventions on Ending Wars and Building Peace' (Oxford University Press, 2016).
View all posts by Mark Kersten →
This entry was posted in Liberia, Sierra Leone, Special Court for SIerra Leone (SCSL) and tagged Charles Taylor. Bookmark the permalink.