If Simone Gbagbo ends up in The Hague, She won’t be the First

As readers will know, the ICC has unsealed an arrest warrant for Simone Gbagbo, becoming the first woman indicted by the Court. Today, Janet Anderson joins JiC for this timely background post on women who have been tried at international criminal tribunals. Janet is a consultant supporting local journalists covering international justice based in The Hague.

Simone Gbagbo shortly after being arrested, along with her husband Laurent, in Abidjan, Ivory Coast (Photo: EPA)

Simone Gbagbo, whose arrest warrant by the ICC was made public on Thursday, is charged with the crimes against humanity of murder, rape and other forms of sexual violence, other inhumane acts and persecution. The warrant against her describes how she was part of the inner circle who organized post election violence in the Ivory Coast, in 2010 and 2011, targeting civilians who were seen as supporters of her husband – Laurent Gbagbo’s – political rival Alassane Ouattara or from specific ethnic or religious communities. The warrant notes that while she was “not elected, Ms Gbagbo acted as an alter ego for her husband, exercising the power to make State decisions.”

But Simone Gbagbo is not the first woman to be charged by an international court for crimes against humanity. Both the International Criminal Tribunal for the former Yugoslavia (ICTY) and for Rwanda (ICTR) have also tried and sentenced a woman.

Pauline Nyiramasuhuko at the ICTR

Pauline Nyiramasuhuko was sentenced to life imprisonment when she became the first woman to be convicted of genocide and crimes against humanity by an international court. She was the former Rwandan Minister of Women’s Development and was tried alongside her son Arsène Shalom Ntahobali, who had been a student prior to the genocide, as well as four others, in what was known as the ‘Butare trial’.

The judgment describes what happened in 1994 in the area of Butare as refugees took shelter from the violence engulfing the country. It details how local leaders including Nyiramasuhuko armed and directed the activities of the militia group the Interahamwe. The judgement declares that

“The evidence presented by these survivors, and accepted by the Chamber, is among the worst encountered by this Chamber; it paints a clear picture of unfathomable depravity and sadism.” 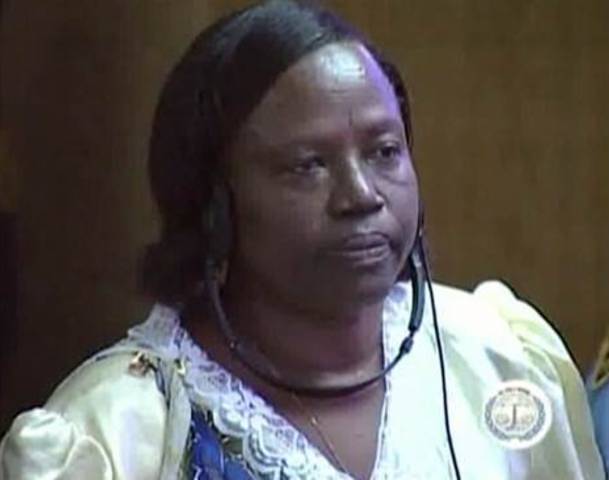 Pauline Nyiramasuhuko at the ICTR (Photo: All Voices)

The court, in a trial which lasted for 10 years, involving 189 witnesses, heard how Nyiramasuhuko asked her son to organise militias to take part in the kidnap and rape of women and girls in Butare. In the end, Pauline Nyiramasuhuko was convicted of genocide and of conspiracy to commit genocide as well as rape as a crime against humanity. Ntahobali, who was in his early 20s at the time of the genocide, was also found guilty and sentenced to life.

“Nyiramasuhuko, Ntahobali, Interahamwe, and soldiers went to the Butare préfecture office to abduct hundreds of Tutsis. Many were physically assaulted, raped, abducted, and taken away to various places in Butare, where they were killed. During the course of these repeated attacks on vulnerable civilians, both Nyiramasuhuko and Ntahobali ordered killings… Nyiramasuhuko aided and abetted rapes and is responsible as a superior for rapes committed by members of the Interahamwe.”

Upon her conviction, the BBC ran a profile of Nyiramasuhuko. It describes how she would also force people to undress before loading them on to trucks, taking them to their death.

Earlier, a 2002 New York Times article contacted several of the witnesses in the case, along with Pauline’s relatives, in order to try to establish the motivation behind her role in the genocide. It quotes one witness as saying:

“Pauline goaded the Interahamwe, commanding, ”Before you kill the women, you need to rape them.””

And in another interview:

“One Interahamwe, a young man named Emmanuel Nsabimana, told me through a translator that Pauline ordered him and the others to burn the women. Nsabimana recalled that one Interahamwe complained that they lacked sufficient gasoline. ”Pauline said, ‘Don’t worry, I have jerrycans of gasoline in my car,’ ” Nsabimana recalled. ”She said, ‘Go take that gasoline and kill them.’ I went to the car and took the jerrycans. Then Pauline said, ‘Why don’t you rape them before you kill them?’ But we had been killing all day, and we were tired. We just put the gasoline in bottles and scattered it among the women, then started burning.””

The article also explains how important the ICTR cases have been in establishing rape as an international crime. And how devastating a crime it was in Rwandan culture.

Gerald Gahima – who was then Rwanda’s Prosecutor General says, ”Rape was the worst experience of victims of the genocide. Some people paid to die, to be shot rather than be tortured. Their prayers were for a quick and decent death. Victims of rape did not have that privilege.”

But while Nyiramasuhuko was “only” charged with rape as a crime against humanity, in the judgment, the bench exclaimed that it had been presented with evidence that could have found guilty her with rape as genocide.

“Although the evidence clearly established Nyiramasuhuko’s direct role in ordering Interahamwe to rape Tutsi women at the Butare préfecture office, the Prosecution only charged Nyiramasuhuko with responsibility as a superior for rape.”

Many other women have been convicted of genocide in Rwandan courts, including two nuns were found guilty of participating in the genocide by a court in Belgium.

Biljana Plavsic at the ICTY

The other woman to have been tried at an international court is Biljana Plavsic, the co-President of the Bosnian Serb leadership, who was convicted at the ICTY of being both directly responsible of, and being part of a joint criminal enterprise to commit, crimes against humanity.

Plavsic had been notorious during the former Yugoslav war for some of her reported comments about Serb racial superiority to Bosnians. Even Vojislav Šešelj, nationalist politican, who gave evidence at the Milošević trial, described her as “insufferably extremist, even for me.”

In the end, Plavsic was sentenced to 11 years’ and earned early release for good beahviour in 2009. She had initially first pleaded not guilty at the ICTY. Then, in a sudden reversal she pleaded guilty. The plea bargain deal with the prosecution saw the two counts of genocide and four other counts of crimes against humanity against her dropped. Her 2002 plea is available on the ICTY website. (The video is in the Outreach section under ‘statements of guilt’ just under ‘voices of the victims’.)

“You have heard, both yesterday and today, the litany of suffering that this produced. I have accepted responsibility for my part in this. This responsibility is mine and mine alone. It does not extend to other leaders who have a right to defend themselves. It certainly should not extend to our Serbian people, who have already paid a terrible price for our leadership. The knowledge that I am responsible for such human suffering and for soiling the character of my people will always be with me.”

Despite her acceptance of personal guilt, following her release Plavsic gave an interview to a Swedish magazine in 2009 in which she retracted her guilty plea:

“I sacrificed myself. I have done nothing wrong. I pleaded guilty to crimes against humanity so I could bargain for the other charges. If I hadn’t, the trial would have lasted three, three and-a-half years. Considering my age that wasn’t an option.”

Simone Gbagbo at the ICC

It remains to be seen how Simone Gbagbo will defend herself if she is ever reunited with her husband at the ICC. While there is no guarantee that she will be transferred to The Hague, if she is eventually handed over to the ICC, she will be the first woman tried at the Court but far from the first to be tried at an international criminal tribunal.

Mark Kersten is a consultant at the Wayamo Foundation, a Senior Researcher at the Munk School of Global Affairs, and a law student at McGill University Law School. He is also author of the book, 'Justice in Conflict - The Effects of the International Criminal Court's Interventions on Ending Wars and Building Peace' (Oxford University Press, 2016).
View all posts by Mark Kersten →
This entry was posted in Crimes against humanity, Genocide, ICTY, International Criminal Court (ICC), International Criminal Tribunal for Rwanda (ICTR), Ivory Coast / Côte d'Ivoire, Ivory Coast and the ICC, Serbia and tagged Biljana Plavsic, Pauline Nyiramasuhuko, Simone Gbagbo. Bookmark the permalink.

1 Response to If Simone Gbagbo ends up in The Hague, She won’t be the First