Backing the ICC: Why Botswana Stands Alone Amongst AU States

In the midst of the recent rancour and controversy in the relationship between African Union (AU) member states and the International Criminal Court (ICC), it was all too easy to forget that one state decided to take a rather valiant stand. When the African Union recently passed a resolution calling into question the conduct of the ICC and claiming that it had unfairly targeted African leaders, the sub-Saharan nation of Botswana decided it wasn’t having any of it.

If you read the AU resolution, you’ll notice that it includes a single footnote which reads: “The Reservation of the Republic of Botswana on the entire decision was entered.” But for that small footnote marring the title of the Resolution, the AU’s anti-ICC pact is otherwise pristine. For those who follow baseball, the footnote is akin to the asterisk hanging over the names of players whose records are tainted by steroid use – except that, in this case, the asterisk denotes courage not cowardice.

Sadly, it was only Botswana that decided to take a stand against the AU Resolution. It came as a disappointment that other state which had previously engaged the ICC and supported its work, including Ivory Coast and South Africa, threw their weight behind the Resolution. Even The Gambia, which reportedly considered voting against the Resolution out of support for the ICC’s Gambian Chief Prosecutor Fatou Bensouda, sided with the AU.

So why did Botswana do it? 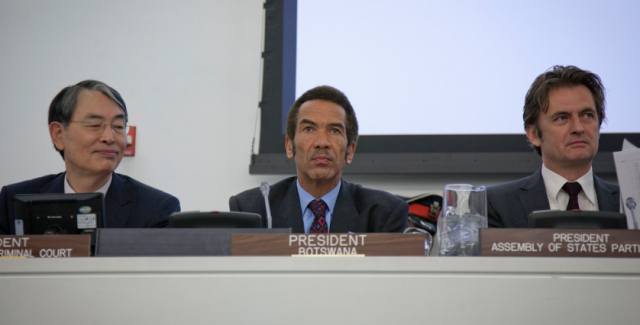 In the above video, Botswana’s ambassador to Kenya, John Moreti states clearly that his country’s decision had nothing to do with the Botswana’s position towards Kenyan President Uhuro Kenyatta or Vice President William Ruto, both of whom face charges at the ICC stemming from Kenya’s 2007/08 post-election violence. Instead, Moreti suggested that the AU’s Resolution was an unhelpful and deleterious political move that would only antagonize the Court and pull the African hinder improved relations with the international community. He added that he thought there was “no problem with the Court” and that any dislike of the Prosecutor did not amount to dislike for the Court itself.

What is so remarkable about Botswana’s dissent is that there is no evidence that it stemmed from any realpolitik calculation. Sure, Botswana will (and has) reaped praise for its commitment to the ICC and its decision to vote against the Resolution will undoubtedly boost its reputation in human rights and international justice sectors. But how much is a high-five from Human Rights Watch worth in comparison to the potential political and economic costs of being the sole voice opposing the African Union? To be sure, Botswana surely faces some very unhappy leaders on the continent.

Of course, there is a risk in being too state-centric here. Botswana is not “alone” in its stance against the African Union. It is quite clear that millions of African citizens support the ICC and international criminal justice – even if it hasn’t always lived up to their expectations.

Still, Botswana deserves all of the praise it is receiving. It appears that their position is one of pragmatism and principle rather than merely political calculation. Bensouda’s remarks from July 2011 could easily be repeated again:

“Botswana has not been hesitant in publicly maintaining her stance on such matters being determined by the ICC.  It is one of those few countries, especially in Africa, that encourage the work of the ICC and one of the countries that take their responsibility under the ICC Statute very seriously. This has not changed over the years.”

The Kenyan news report presents Botswana as “Africa’s renegade nation”. But Botswana’s decision to stand alone in the face of the AU’s anti-ICC rhetoric shouldn’t be derided. It is remarkable and praiseworthy. If there was an ICC member-state of the year award, Botswana would be a front-runner.

Mark Kersten is a consultant at the Wayamo Foundation, a Senior Researcher at the Munk School of Global Affairs, and a law student at McGill University Law School. He is also author of the book, 'Justice in Conflict - The Effects of the International Criminal Court's Interventions on Ending Wars and Building Peace' (Oxford University Press, 2016).
View all posts by Mark Kersten →
This entry was posted in African Union (AU), Botswana, International Criminal Court (ICC), Kenya, Kenya and the ICC. Bookmark the permalink.

12 Responses to Backing the ICC: Why Botswana Stands Alone Amongst AU States