A Snowball’s Chance in Cairo: The ICC To Intervene in Egypt? 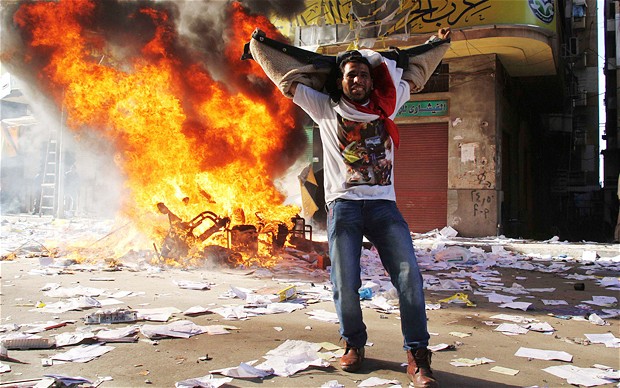 A protestor cheers after a Muslim Brotherhood office was ransacked (Photo: Reuters)

A group of international lawyers and legal scholars representing the Muslim Brotherhood are pushing for the International Criminal Court (ICC) to investigate alleged crimes committed in Egypt. According to The Globe and Mail’s Paul Waldie, the Brotherhood’s legal team believe that violence committed by the Egyptian army constitutes crimes against humanity:

The legal battle is led by a team in London that includes one of Britain’s top international criminal lawyers, a former official with the United Nations and the former director of public prosecutions in Britain. The lawyers have not only filed a complaint with the ICC alleging widespread crimes against humanity by the military, but they also plan to file a series of lawsuits around the world targeting individual Egyptian army officers.

The most obvious obstacle to the ICC intervening in Egypt is the fact that the country is not currently a member-state of the Court, despite occasional proclamations that it would sign and ratify the Rome Statute. Thus, for the ICC to investigate any alleged crimes committed in Egypt, one of two things would have to occur: First, the UN Security Council could refer Egypt to the ICC. It goes without saying that that is not going to happen; such a referral is not on the Council’s radar. Second, the Egyptian government could voluntarily refer a particular event or time-period to the ICC, even if Egypt is a non-member state. There is precedence for this. Despite not being a member of the ICC, Ivory Coast accepted the Court’s jurisdiction in April 2003.

This second option represents what the legal team representing the Muslim Brotherhood believe should happen. And it is here where their efforts become particularly controversial and political. The team seems to be suggesting that the ousted former President and Muslim Brotherhood leader Mohammed Morsi, is the rightful leader of Egypt and, therefore, can refer violence in Egypt to the Court. This is a tenuous argument at best. While there are ongoing questions about the legitimacy and legality of the coup that deposed Morsi, there are few who would suggest that he remains the head of state of Egypt. According to Kevin Jon Heller, for example, 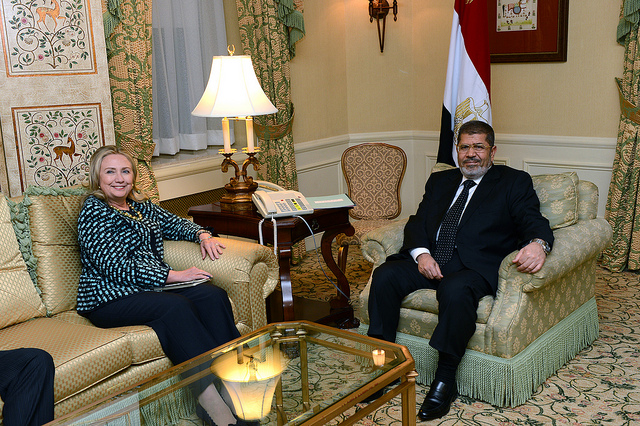 Thus, beyond an intellectual exercise, it would be hard, if not impossible, to argue that Morsi was the rightful President of Egypt who could request the ICC to investigate alleged crimes committed in the country.

But there is another issue to consider here: does the ICC have any interests in intervening in such a case? After all, the filing has been made and at some point (likely in the distant future), the Court’s Office of the Prosecutor will have make an official decision to open an investigation or not.

As suggested above, the Muslim Brotherhood’s legal team has wrapped issues of democratic impropriety (who the rightful leader of Egypt is and whether the coup was legitimate) up in issues of international criminal law. It is a bold move and perhaps a politically intelligent one insofar as it seeks to bring added publicity and attention to ongoing events in Egypt as well as earn sympathy for the Brotherhood. But the ICC has been very hesitant to take on such highly controversial politicized cases.

For example, when the Palestinian National Authority requested that the ICC investigate alleged crimes committed in relation to the ongoing conflict between Palestine and Israel, the Court dragged its feet. Then Prosecutor Luis Moreno-Ocampo was wary of intervening because to do so would have been tantamount to accepting that Palestine was a state, a political as much legal decision that the Prosecutor clearly felt very uncomfortable with. As a result, the Office of the Prosecutor declared that it could not investigate any alleged crimes until the question of Palestine’s statehood was resolved. It was a pragmatic decision which avoided steeping the Court in a highly political debate that it could never win. Indeed, most believe it was the right decision – although it remains remarkable that it took the Prosecutor two years to come to it.

Mark Kersten is a consultant at the Wayamo Foundation, a Senior Researcher at the Munk School of Global Affairs, and a law student at McGill University Law School. He is also author of the book, 'Justice in Conflict - The Effects of the International Criminal Court's Interventions on Ending Wars and Building Peace' (Oxford University Press, 2016).
View all posts by Mark Kersten →
This entry was posted in Egypt, International Criminal Court (ICC), Palestine, Palestine and the ICC and tagged Mohammed Morsi, Muslim Brotherhood. Bookmark the permalink.

4 Responses to A Snowball’s Chance in Cairo: The ICC To Intervene in Egypt?