Justice for the Rohingya – What States, like Canada, Can Do Now

This blog was jointly written by Amanda Ghahremani, the Legal Director of Canadian Centre for International Justice, Fannie Lafontaine, a professor at Université Laval and Canada Research Chair on International Criminal Justice and Human Rights, and Mark Kersten, a Fellow at the Munk School of Global Affairs and Deputy Director of the Wayamo Foundation. All are members of the Canadian Partnership for International Justice. This opinion is supported by the Montreal Institute for Genocide and Human Rights Studies and Avocats sans Frontières Canada. A version of this article was originally posted at the Huffington Post (in both French and English). 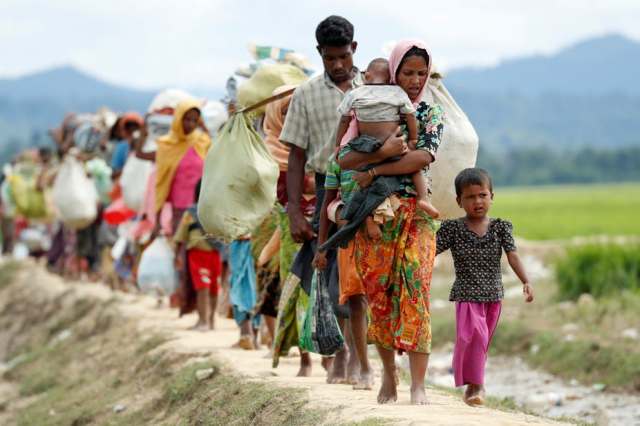 Refugees along the journey from Myanmar to Bangladesh (Photo: Jorge Silva / Reuters)

Despite the deportation of hundreds of thousands of civilians as well as allegations of genocide and ethnic cleansing, the Rohingya people have been denied recourse to justice and accountability. Some creative and ground-breaking thinking at the International Criminal Court (ICC) may just change that. Now, Canada has a unique opportunity to punch above its weight and make an indelible and lasting commitment to justice for a people who desperately deserve it.

On 6 September, judges at the ICC ruled that the Court has jurisdiction to investigate the crime of deportation committed by Myanmar’s army against the Rohingya, who have been forced to flee the country into neighbouring Bangladesh. This followed numerous legal interventions by experts, including the Canadian Partnership for International Justice, of which we are members, in support of this outcome.

The decision was not uncontroversial. But the ICC’s chief Prosecutor successfully argued that, because deportation is a crime initiated on the territory of a non-member state of the ICC (Myanmar) but completed in a member-state (Bangladesh), it gave the Court jurisdiction to investigate. With a dithering United Nations Security Council and no regional tribunal set up to mete justice, the ICC’s move represents the best opportunity to achieve a degree of accountability for atrocities committed against the Rohingya people.

The ICC’s decision comes on the heels of a scathing UN report published this month detailing violent measures taken by Myanmar’s army to remove and ethnically cleanse the Rohingya and other minorities in the country. The UN Report specifically recommended that top Myanmar military officials be investigated and prosecuted for international crimes. With the ICC’s ruling, this may become a reality.

The UN report, which highlighted forceful measures employed by the Myanmar army, including extrajudicial killings, rape, and torture – crimes that amount to genocide, crimes against humanity, and war crimes – was rightfully met with outrage in Canada. Prominent lawyers and human rights defenders publicly called on the government to revoke nominal Burmese President Ang Sun Suu Kyi’s honorary Canadian citizenship after Suu Kyi was criticized for failing to use her “moral authority” to prevent the escalating violence.

But Canada has a role to play beyond symbolic measures. As members of a network of Canadian scholars and lawyers working on international justice, known as the Canadian Partnership for International Justice, we believe that Canada should absolutely play a leadership role and we urge the Canadian government to champion accountability initiatives within the international community to address the genocide unfolding before our eyes.

Canada has already announced its interest in a peace process to quell the ongoing violence. Prime Minister Trudeau appointed a special envoy to Myanmar, Bob Rae, and announced earlier this year that Canada is committed to responding to the Rohingya crisis through humanitarian aid and accountability measures. Consequently, Canada has sanctioned a top Myanmar military commander under the Justice for Victims of Corrupt Foreign Officials Act. With the UN report’s publication of additional names of top commanders responsible for international crimes, Canada should add these individuals to the sanctions list.

But on the accountability front, Canada can do more. Now that the ICC has ruled that it has jurisdiction over the crime of deportation, Canada should consider the role it can play to help facilitate cooperation and legal assistance to an overworked and under-resourced ICC. It could work with other member-states of the ICC in the region to refer Myanmar to the Court, as in the case of Venezuela. It could also provide the ICC with additional funding, as it did following the opening of an investigation into atrocities in Darfur. After White House National Security Advisor John Bolton’s fallacious attacks on the ICC this week, it is imperative now more than ever for Canada to demonstrate its steadfast support for this institution through concrete action.

Over 700,000 Rohingya are currently in Bangladesh, where they hold key testimony and evidence of the crimes committed against them. Time is of the essence. Evidence degrades and memories fade and change with every passing day. Canada can play a leading role in accountability efforts by helping to build investigative capacity in Bangladesh, so that evidence can be collected and submitted to the ICC or any other competent judicial body willing and able to pursue accountability for the crimes committed in Myanmar.

The ICC’s jurisdiction over deportation currently only covers one of several international crimes detailed by the fact-finding mission, although it may be expanded to include the persecution of the Rohingya people. For there to be true accountability, Myanmar’s military commanders must be held accountable for all of the crimes that they have perpetrated, including genocide, war crimes, and other crimes against humanity. Victims also need an avenue for collective and personal healing.

Canada can help to establish an independent investigative mechanism mandated by the UN General Assembly with the aim of collecting and preserving evidence and preparing it for the moment that it can be used in a court of law. Ottawa has done so before, with the UN’s International Impartial and Independent Mechanism for atrocities committed in Syria. In addition, the government should seriously consider supporting a truth commission so that survivors have a platform to share their testimony and have their long-silenced voices heard.

The Canadian government should do more to align its foreign policy with the prerogatives of human rights and global justice. In line with this aim, we have called for the establishment of a Canadian Ambassador for International Justice.

Prime Minister Trudeau is fond of speaking of “shared values.” What is more important, indeed essential, to share than the value and commitment to basic dignity? Canada can — and should — play a part in ensuring that, through recourse to justice and accountability, the dignity of the Rohingya people is restored.

1 Response to Justice for the Rohingya – What States, like Canada, Can Do Now