Late last week, the Office of Public Counsel for the Defence (OPCD), which has been representing Saif al-Islam Gaddafi at the ICC, filed its official response to Libya’s admissibility challenge at the ICC. The impressive report, a whopping 92-pages long, should be read in its entirety. It includes an in-depth account of the arrest and detention of Melinda Taylor and the ICC4. Kevin Jon Heller at Opinio Juris has covered the most controversial and pertinent bits of the report (see here and here) and has posted a must-read piece on the relevance of the failure to provide Saif with due process in Libya’s admissibility challenge. Here are a few things that I found particularly interesting and important.

The world’s media, with a few exceptions, appear to have read the first two pages of the report and stopped there. Perhaps that’s the downside of a 92-page report replete with pertinent information. Still, it is worth noting that most media actually misleadingly reported the first pages of the report, which constitute a statement given by Saif. Stories ran a headline suggesting that Saif is seeking a trial at the ICC. They presumably refer to a passage in Saif’s statement that reads:

“Over a year ago, representatives of the NTC asked the international community to intervene so that the Libyan people could have justice, I am asking for exactly the same thing – the only way for Libya and the Libyan people to have justice is for the ICC to try this case in a fair, impartial and independent manner, and, in so doing, set standards, which Libya can follow on its future path to democracy and the rule of law.”

However, reports have completely ignored a preceding passage, where Saif suggests that his preference, ideally, is to be tried in Libya:

“I would have liked to have been tried in Libya by Libyan judges under Libyan law in front of the Libyan people. But what has been happening in my case cannot be called a trial.”

Saif thus appears to be making precisely the same case that many human rights and international legal observers have made, namely that trial justice is best served where alleged atrocities have taken place, but that in the absence of a functioning judiciary and political stability, this ideal is overridden by the interests of achieving justice. Somewhat oddly, then, it appears that Saif, his Defence Counsel and human rights groups form a camp in favour of a trial at the ICC, while Libyan authorities and the Office of the Prosecutor have defended Libya’s right to try Saif domestically. 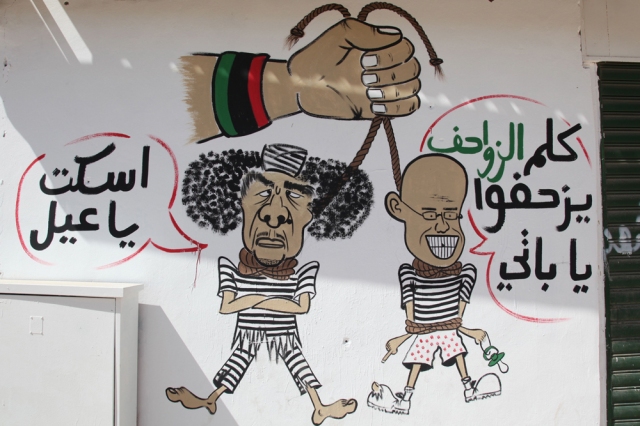 The Other ICC4 Staff Members were not Allowed to Leave

One of the more curious aspects of the illegal arrest and detention of OPCD staff members Melinda Taylor, Helene Assaf, Alexander Khodakov, and Esteban Peralta Losilla, were reports that only Taylor and Assaf had been arrested by the Zintani militia, while Khodakov and Peralta were told they were free to leave but had stayed behind to provide “moral support“. Indeed, in a July 18 letter to the UN Security Council, the Libyan government stated that:

“The Prosecutor-General’s office decided to release the other two members of the delegation, however, they willingly decided to stay in solidarity with their colleagues.”

Admittedly, I too wrote that this suggested an act of remarkable solidarity. But something was always a bit fishy about this scenario. Tactically, it made little sense to provide moral support when one of the staff members could have left and communicated the truth about what had occurred and worked on the release of the other staff members. This seemed especially true given confirmed reports that the staff were being treated well (this is reiterated in the OPCD’s report as well). In this context, there were suggestions that, in fact, Peralta and Khodakov were not entirely free to leave. One knowledgeable commenter at JiC, for example, suggested that

“[It] is true that no charges have been brought against Esteban, Alexander and Helena, but from the moment they were told to leave the country and chose to stay with Melinda, they are being held exactly in the same conditions as Melinda, isolated and with all possibilities of communicating with anyone forbidden by the militia.”

The OPCD report clarifies the situation even further:

…in order to avoid potential repercussions from the Security Council, the Libyan authorities falsely informed the Security Council that only one ICC official had been arrested, and that the other three officials had stayed in detention ‘out of solidarity’.

Dr. Gehani informed the ICC delegation that only Mr. Peralta Losilla and Mr. Khodakov were free to leave; Counsel and the ICC interpreter were required to stay until the prosecutors retumed, and then they could leave. The four ICC officials decided that Mr. Peralta Losilla should travel to TripoU in order to liaise with the ICC and authorities there, however, when Mr. Perlata Losilla tried to leave, he was then informed that all four ICC officials were under arrest, and Mr. Peralta Losilla was prevented from departing. At no point in time were the four officials provided with any legal documentation conceming the basis for detaining them, and, on 10 June 2012, they were transferred to a jail, which was surrounded by tanks.

This is quite damning for Libya. If true, not only did the NTC lie to the Security Council, but it acted in a way that betrays that it had acted illegally but needed to detain the ICC staff incommunicado in order to hide the truth. 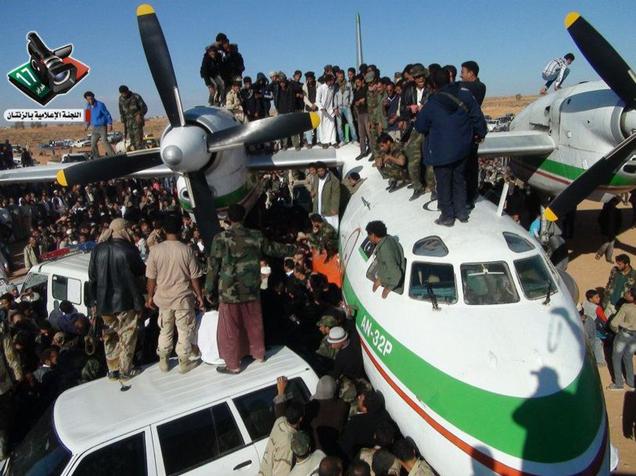 The plane carried Saif to Zintan following his capture in the southern desert expanses of Libya (Photo: AP/Zintan Media Center)

Bad Blood – and Lots of it.

Even before this debacle emerged, there was a significant degree of animosity between the parties involved. The OPCD had requested the Pre-Trial Chamber to remove former chief Prosecutor Luis Moreno-Ocampo from the case for lacking impartiality. When the staff were arrested and Moreno-Ocampo was asked for his thoughts, he appeared to blame the OPCD, saying “It’s not what we would expect of the Court, of the defence.” Moreover, in responding to Taylor’s arrest, Nick Kaufman tellingly suggested that Taylor had “fallen victim of this hostility which is because of the intensity of the litigation.” This sentiment certainly comes through in the OPCD report, which suggests that the ICC staff had been detained as direct retribution for their work in defence of Saif:

“Dr. Gehani [the OPCD’s point-person in Libya] also informed both the Counsel for Mr. Gaddafi and the ICC interpreter on independent occasions that the actions of the Libyan authorities were ‘retaliation’ for the allegations, which had been set out in the OPCD report of 7 March 2012.”

Given this high level of animosity amongst the parties, who will represent Saif at the ICC? It seems increasingly clear that there is no good answer to that question. In a motion filed just a day before the OPCD’s report, the lawyers representing the Libyan government, which includes Payam Akhavan and Philippe Sands, claimed that “communications between the Libyan Government and the OPCD appear to have irretrievably broken down” and cast doubt on “the OPCD’s ability to properly and genuinely represent Mr Gaddafi’s views.”

Defending Justice – and the ICC’s Integrity

The OPCD’s report is important and telling on many levels. This post has barely scratched the surface. But above all, the report’s worth resides in its overall defense of justice, due process and the ICC’s integrity. The Court is under a tremendous amount of political pressure to allow Libya’s admissibility challenge to pass. And the stakes are extremely high. As the report notes:

“If the ICC were to bow to such pressure, or to be influenced by the diplomatic pessimism that the recent events simply highlight the difficulty of eventually transferring Mr. Gaddafi to The Hague, then the Court will set a deleterious precedent both for international justice, and for the safety and security of ICC personnel, who will henceforth be viewed as potential bargaining tools by any States which are being required to cooperate with the ICC against their will.”

Regardless of what the judges rule, the chances of Libya surrendering Saif to the ICC are zero-to-none. In the end, then, the success or failure of Libya’s admissibility may be irrelevant for Saif. But it will undoubtedly be critical for the future of the ICC.

Mark Kersten is a consultant at the Wayamo Foundation, a Senior Researcher at the Munk School of Global Affairs, and a law student at McGill University Law School. He is also author of the book, 'Justice in Conflict - The Effects of the International Criminal Court's Interventions on Ending Wars and Building Peace' (Oxford University Press, 2016).
View all posts by Mark Kersten →
This entry was posted in Defense Counsel, Libya, Libya and the ICC, The Tripoli Three (Tripoli3) and tagged Abdullah al-Senussi, Alexander Khodakov, Esteban Peralta Losilla, Helene Assaf, Melinda Taylor, Office of Public Counsel for the Defence, Saif al-Islam Gaddafi. Bookmark the permalink.