A New Deal: an ICC “Supervised” Trial for Saif Gaddafi in Libya?

The debate on how and where Saif al-Islam Gaddafi, the son of former Libyan leader Muammar Gaddafi, is tried has taken a new and rather unexpected turn. The BBC has reported that a “Western official” told their correspondent that a deal between Libya and the International Criminal Court (ICC) is close to being completed. The agreement would see Saif tried in Libya, but “under ICC supervision”.

The reported deal, which would result in the ICC dropping its demands to try Saif in The Hague, comes just days after the ICC’s Pre-Trial Chamber ruled that Libya was obliged to surrender Saif to the Court immediately. The country’s National Transitional Council (NTC) subsequently decided it would appeal the ruling while simultaneously unveiling plans – and a refurbished courtroom – to begin Saif’s trial within the next few weeks.

The debate on who should try Saif and how, of course, is nothing new. Readers will recall that a number of commentators (including myself) have supported an ICC trial of both Saif and former Libyan intelligence chief, Abdullah al-Senussi, in Libya – a possibility the Rome Statute envisions. However, the BBC report leaves unclear how such an arrangement would work. Kevin Jon Heller raises a number of pressing questions on the subject:

What would the charges be?  Would the ICC impose a de facto complementarity requirement on Libya, conditioning any deal on Libya’s willingness to prosecute Saif for the same crimes against humanity, murder and persecution, based on the same conduct for which the arrest warrant was issued?  Or would the ICC be willing to allow Libya to prosecute Saif for “ordinary” crimes (i.e., not international) based on the same or different conduct as long as the charges were adequately serious?  (An approach to complementarity that I have defended here.)  How, exactly, would the ICC “supervise” the trial?  Are we simply talking some sort of positive complementarity, whereby the Court would provide the Libyan court system with training and the like?  Or would the ICC have the right to insist on specific rules of evidence, due-process guarantees, and so forth?

The answers to these key questions will determine whether any arrangement between the ICC and Libya is a bright idea – for the Court, for Libya, and for justice. Here are a few other questions and thoughts.

If the BBC’s report is accurate, it raises the question as to why the NTC has suddenly decided to cooperate with the ICC and given it a slice of the justice in Libya pie. While it was largely under-reported, an ‘in situ’ ICC trial in Libya was considered and proposed by the Court’s Office of the Prosecutor during negotiations with Libyan authorities. The idea was flatly rejected by the NTC which, while engaging with the Court in an effort to gain approval for a local trial, has been generally unconcerned with pressure exerted by the ICC.

If the about-face by the NTC to consider an ICC “supervised” trial is real, it is likely to be a response to threats by the ICC to refer Libya’s recalcitrance towards the Court to the UN Security Council. The NTC has shown it will respond to the authority and pressure of the Security Council, but not necessarily that of the Court. The report from an anonymous “Western diplomat” may even suggest that an ICC-member state of the Security Council, likely France or Britain, is agitating for more cooperation between the Court and Libya.

Another possibility is that the NTC has felt pressure and was possibly embarrassed by a report from the ICC’s registry that showed up on the Court’s website but was subsequently taken down. The report reads like a scene from a John le Carré novel, detailing how officials from the Court were almost unable to visit Saif at all; that, with the exception of five minutes, a Libyan prosecutor was present when they met with Saif during the entire visit; and that, while in custody, he has likely been mistreated. 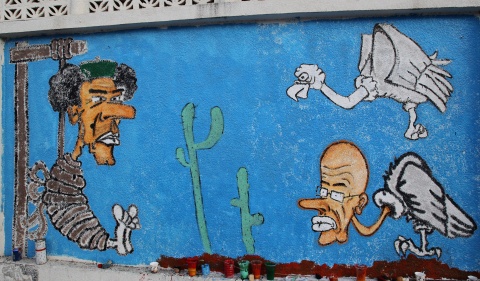 The BBC report adds that the anonymous diplomat suggested that “the court could accept a death sentence if the trial was fair and transparent, and there was an adequate appeals process.”

Readers are likely tired of being reminded, but Saif remains in the custody of Zintani rebels – and not the NTC. Libyan authorities have indicated that negotiations for Saif’s transfer were underway but there have been no reports suggesting that the negotiations have been successful. Moreover, the report from the ICC’s Registry notes that there are two factions of Zintani rebels and that the faction which has custody of Saif is not loyal to the NTC. Talk of a trial is largely fanciful before Saif is transferred to Libyan authorities.

Once again, the fate of Abdullah al-Senussi has been lost in the fray. Virtually nothing has been reported since the former intelligence chief was captured almost a month ago in Mauritania. Libya, France and the ICC have all requested that Mauritania surrender Senussi to them.

This week, a report from the Chicago Tribune quoted Mauritanian President, Mohamed Ould Abdel Aziz, as suggesting that Senussi was sick. But Abdel Aziz also added that Senussi’s “case is being studied. We have a number of questions to put to him and we haven’t finished with him yet.” This would seem to confirm that Senussi, whose knowledge of the Gaddafi regime is likely unparalleled, is being held in Mauritania in order to be interrogated. Notably, shortly after his arrest, the US said it had asked to question him.

All of these issues will inevitably lead to the question of whether an ICC “supervised” trial of Saif in Libya a good thing. Heller isn’t convinced and points to the dangers of the Court handcuffing itself to a Libyan-led trial: “it is very unlikely that Saif will get a fair trial in Libya, ICC involvement or not.”

Critically, the answer will depend on the extent to which the process can be guaranteed to be free and fair, which will only become clear if and when the agreement is made public. As suggested above, it will be the details of the agreement which will determine whether the deal is wise or not.

Nevertheless, such a trial has the potential to serve justice, help consolidate Libya’s transition to democracy, and boost the legitimacy of the Court. Some might point to the fact that the ICC’s involvement will necessarily slow justice in Libya down. Given recent events, however, I’m not sure that’s a bad thing. The alternative, remember, is hastily done ‘justice’ ending in the death penalty, an empty-handed ICC, and a huge question-mark over the pursuit of accountability in Libya.

Mark Kersten is a consultant at the Wayamo Foundation, a Senior Researcher at the Munk School of Global Affairs, and a law student at McGill University Law School. He is also author of the book, 'Justice in Conflict - The Effects of the International Criminal Court's Interventions on Ending Wars and Building Peace' (Oxford University Press, 2016).
View all posts by Mark Kersten →
This entry was posted in International Criminal Court (ICC), Justice, Libya, Libya and the ICC, Mauritania and tagged Abdullah al-Senussi, Saif al-Islam Gaddafi. Bookmark the permalink.

1 Response to A New Deal: an ICC “Supervised” Trial for Saif Gaddafi in Libya?