Changing of the Guard: Bensouda In, Ocampo Out

Fatou Bensouda has officially replaced Luis Moreno-Ocampo (who is off to FIFA!) as the Chief Prosecutor of the International Criminal Court. With dozens of writers and observers scrambling to publish their thoughts on what Bensouda’s tenure will and should focus on, I figured I would add a collection of thoughts as well.

There is no point in denying that Bensouda became Prosecutor in large part because she is African. Very early in the process of selecting a new Prosecutor, the African Union (AU) insisted that an African had to be selected. The AU subsequently met little to no resistance and endorsed Bensouda for the job last year. With that said, Bensouda was, in many ways, the perfect candidate. Her resume is sterling, allowing her – and her supporters – to rightfully argue that her record made her an ideal Prosecutor. She thus satisfied both the merit-based and political criteria for the position. Moreover, the sense of continuity she brings to the position after being Moreno-Ocampo’s Deputy Prosecutor may turn out to be a subtle but crucial aspect of her selection.

Yet, it would be wrong to suggest that just because Bensouda is African she will immediately restore relations with those African states who have increasingly criticized the Court for its perceived bias in Africa. As I have argued elsewhere, I believe that the animosity of some African states toward the ICC is a result of the Court’s increasingly close relationship with key powers on the UN Security Council, a relationship that has reaffirmed rather than transcended the global power asymmetries that African states have long sought to undermine and make more equal. It is not surprising that the most vociferous critiques of the Court have come in the wake of UN Security Council referrals of Sudan and Libya to the ICC (as well as the ICC’s investigations in Kenya, which the Prosecutor opened on his own volition). After all, who wouldn’t be disappointed and angered with a Court that appears more interested in catering to the interests of a powerful non-member state, the US, than the thirty-plus member states from Africa without whom the Court would quickly slip into irrelevance?

Of course, this doesn’t mean that the fact that Bensouda is African won’t have important implications. It will, especially in how the Court is perceived. Bensouda’s heritage will undoubtedly make it more awkward and difficult for members of the AU to say the Court is against Africa. After all, she is their selection!

Moreover, we are likely to see a diplomatic dance between the African Union and Bensouda for the next little while as African states get a feel for her and the direction she intends to take the Court. Rather remarkably, Bensouda was invited to the African Union summit in July, already indicating a level of engagement that was impossible in the last years of Moreno-Ocampo’s tenure.

In short, there is an opportunity to improve relations between the Court and African states, but Bensouda shouldn’t be seen as a silver bullet in this context. Whether the relationship is truly transformed will depend on what Bensouda does – and not who she is or where she is from. As the chairman of the Nigerian national human rights commission, Chidi Odinkalu, exclaimed:

“Will she wave a magic wand and cure all the difficulties that exist at the ICC at the moment? No. Can she bring positive disposition over time to transforming the polluted atmosphere in which the institution has been operating in Africa? Absolutely.”

Stand up to the Security Council

One thing that Bensouda could do that I believe has the potential to transform relations between the ICC and African states, as well as boost the legitimacy of the Court, is to be tougher on the Security Council. The Council has instrumentalized the Court, nowhere so clearly as in the case of Libya. It remains a distinct possibility that the intervention in Libya will leave the ICC with a large bill, no one in the dock, and a debilitating controversy over ICC staff members.

Will the ICC, under Bensouda’s leadership, stand up to key powers on the UN Security Council?

Of course, standing up to the Security Council is no easy task. After all, the Court clearly gets a sense of legitimacy from gaining jurisdiction into non-member states. As I have written before, the Court is stuck between a rock and hard place in terms of its relationship to the Council. But being more vocal about its disappointment in the Council’s lack of political and material support for the Court’s mandate would be a healthy start. Some, including the former President of the ICC’s Assembly of States Parties, have even suggested that if the Council were to refer another situation to the Court such as Syria, the ICC might do well to simply say: “no thank you.”

On this matter, I have my doubts that the Office of the Prosecutor is ready to take a strong stance. Bensouda recently said that she views the ICC as a “tool” of the Responsibility to Protect (R2P) which, of course, can only be invoked by the UN Security Council.

It has been widely suggested that investigating and prosecuting gender and sex-related crimes will be a major focus of Bensouda’s tenure. This would be a welcome development. Gender and sex crimes have largely escaped attention at the ICC. Earlier this year, she discussed her views on the matter:

“[I]t has been as if there was a tacit agreement to look the other way as women and children were sexually abused – minimizing, trivializing, denigrating, and silencing the victims, destroying their credibility and further violating their dignity, so abusers can continue unimpeded…I have always placed a big emphasis on addressing and prosecuting sexual and gender crimes. These are crimes that have gone un‐reported and un‐punished for so long, with so much shame and misconceptions involved. It is my belief that the law and judicial proceedings are a powerful tool to shed light on these crimes, give a voice to the victims and punish their perpetrators. The law will help to change behaviour.”

My guess (and it is just that) is that we will shortly see additional charges or a request for new arrest warrants by the OTP on gender crimes in the context of Libya. This would help set the tone for Bensouda’s time in office and make a clear break from Moreno-Ocampo’s tenure. 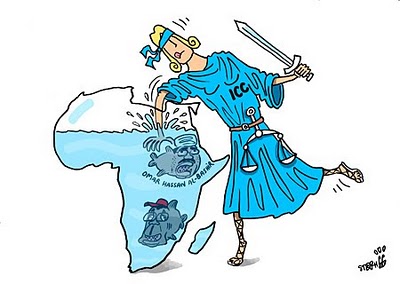 The ability to communicate clearly and to effectively manoeuvre diplomatically is perhaps Bensouda’s strongest advantage out of the gate. Many of the controversies that plagued Moreno-Ocampo were linked to his poor communication skills. It remains a rather stark irony that someone who loves the limelight to the extent that Moreno-Ocampo does was so poor at taking advantage of it. Moreover, Moreno-Ocampo often took criticism personally and responded defensively. Bensouda seems to have all of the right traits necessary to avoid going down the same path. Sierra Leonean lawyer at the Open Society Justice Initiative, Alpha Sesay, remarked that

“Fatou is someone who is ready to listen and provide answers. You can sense that this is a different regime from the past, that she wants to listen, and to have a dialogue…There is no question that the AU [African Union] is warming up to Fatou. How much further things go is going to depend a lot on her diplomatic skills. And in that, she is going to be completely different from Moreno-Ocampo.”

In her numerous interviews (see here, for example), Bensouda has demonstrated her clarity and eloquence in communicating and her willingness to engage with criticism of the Court. This bodes very, very well for her and the ICC more generally.

This point will probably stick out as a bit of an odd ball, but I believe that the role of Russia and especially China will be of particular importance over the next nine years of Bensouda’s tenure. As both states agitate – and achieve – more international influence, their cooperation with the Court will only become more vital.

It actually isn’t crazy to imagine China joining the Court. The relationship between China and the ICC has historically been complicated, but it is important to remember that it hasn’t been as poor as many might assume. China participated actively in the negotiations leading up to the adoption of the ICC’s Rome Statute and has been an engaged partner in the ICC’s Assembly of States Parties since 2002. Not only has it been engaged with the Court, but it has, on occasion, voiced political support for the Court. While this may come as a surprise to many, China has even suggested that its accession to member-state status is a realistic possibility.

For its part, Russian Foreign Minister Sergei Lavrov recently defended the ICC, declaring that the Security Council must respond to Libya’s failure to cooperate with the Court and said that Libya was in breach of Resolution 1970. I’ll leave the irony that a Russian Foreign Minister and not the ICC Prosecutor has been sharper on this point with you.

Whether or not they join the ICC over the next decade is doubtful, at best. But cooperation between the Court, Russia and China may very well be a key to the Court’s continued salience.

More of the Same but Better?

Bensouda seems to have precisely the right attitude to her tenure: a balance of consolidation, continuity and improvement in key areas. I, for one, am of the view that the ICC doesn’t have to have a complete overhaul. While the Court has faced some difficult issues and controversies recently, I disagree with Afua Hirsch that “[t]imes are hard for the international criminal court.” The Court has a long way to go, but it has had a remarkably good few years, bagging its first-ever head of state, making its first-ever conviction, and firmly entrenching itself as a clearly articulated demand by protesters in the Arab Spring. In assessing the ICC, it is important to remember that when the first judges were sworn in, they weren’t even sure if the Court would exist in five or ten years down the road. Bensouda recognized a similar point in her public remarks after being sworn-in, noting that when Moreno-Ocampo became the Court’s prosecutor there were “two staff members…six empty floors and no cases ongoing.” In contrast, nine years later Bensouda notes that:

“I inherit a well-respected and sound functioning office, with almost 300 staff from 80 countries, seven situations under investigation, 14 cases before the chambers, seven preliminary examinations and one verdict.”

Moreover, it is good to hear that Bensouda will not hesitate to open investigations where she sees fit – even if that means opening another case in an African state:

“I will open new investigations in Africa if I have to, but I will not hesitate to open investigations elsewhere if the criteria of the Rome Statute are met. Being African or not is not the issue here.”

Of course, for now, this is all speculation. Bensouda deserves the benefit of the doubt. The extent to which she can transform and improve the ICC will only become clear in the coming years.

Mark Kersten is a consultant at the Wayamo Foundation, a Senior Researcher at the Munk School of Global Affairs, and a law student at McGill University Law School. He is also author of the book, 'Justice in Conflict - The Effects of the International Criminal Court's Interventions on Ending Wars and Building Peace' (Oxford University Press, 2016).
View all posts by Mark Kersten →
This entry was posted in African Union (AU), Fatou Bensouda, Human Rights, ICC Prosecutor, International Criminal Court (ICC). Bookmark the permalink.

1 Response to Changing of the Guard: Bensouda In, Ocampo Out